It’s Only Weird if it Doesn’t Work

Posted on September 30, 2013 by Michael Welchert

For decades the Bud Light commercials have been culturally contagious.  I’m not a beer

drinker, but the magic of community and camaraderie they produce is intoxicating.  Here is one of their “It’s only weird if it doesn’t work” commercials…

You’ve heard of players or coaches who have certain game time rituals or certain clothes they wear, but so do fans apparently.  People want to see their team win and are willing to do just about anything to help them win.  If people weren’t weird enough at tailgate parties the Bud Light commercials certainly have given them permission to go overboard.

One of the peculiarities of this commercial that struck me was that weird may also just be a synonym for mystery, or as the commercial I posted says…very superstitious, or as another commercial says at the end, you have to believe.

Of course Bud Light is trying to attach itself to people’s superstitions so that what makes the difference between winning and losing is not only the rituals you practice, but the beer you drink.  It is all one great big happy ceremony and celebration.  After all, we all want to be a part of a winning team!

Winning for the people of God is in our weekly weirdness.  On Any Given Sunday the 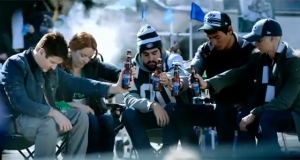 heart of our ceremony and celebration is a meal (tailgate party) that in our superstition or mystery of faith believes that we are participating in the Body and Blood of Christ.

You see it’s not strange or weird that we eat together when we come together, it’s strange if we don’t.

When you believe in things you don’t understand.  Christianity is a Confession not an Explanation.  We confess more than we can explain, that’s why it’s only weird if it doesn’t work.

My wife Diana and I have been married since 1985 and have five wonderful children. I have been in ministry since 1980 and we currently reside in the Denver, CO area.
View all posts by Michael Welchert →
This entry was posted in Sacred and tagged celebration, ceremony, communion, community, mystery, sacrament, superstition, weird. Bookmark the permalink.
%d bloggers like this: