Can You Hear Me Now?

Posted on November 7, 2013 by Michael Welchert

Vision I  Christ in the midst of the Church

Jesus’ band of followers known only as the Church were together facing a very real devil with very real persecutions through very real governments and within them is the working of the world and the flesh. Into the midst of that persecution comes the very real Presence of the Jesus as the central stem of the candlestick and he is speaking to each of them and all of us. And so it unfolds, it is the message of the stem of the candlestick to all the lamp stands.

He is telling them it only looks as if the world is triumphant. Things are not what they 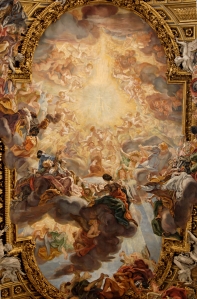 seem to be. All He asks of the Church is that they maintain that mystical, vital union to Him, and as long as that is in correct order, nothing from the outside can ever move them. It is as if He is saying, I am going to give you a vision, and show you that Satan is already defeated. I know it doesn’t seem like that, because you are facing a world that is ferocious and is breathing fire all over you and you feel you are melting away, but don’t worry the world is already defeated. When I rose from the dead I said, ‘Be of good cheer’ I have overcome the world. Whatever you face I want you to see I have risen victorious. As there is a sword that comes forth from my mouth, you as my Body must also use speak forth my word from your mouth to overcome your enemies from within and from without.

Jesus’ presence and these letters were addressed to seven real churches and every one of them that existed in that day in the conditions that were spoken of then, can be found among us today. I do not believe it is true that you can find seven ages of the church history. I believe that at any time in church history you can find an Ephesus, at any time in 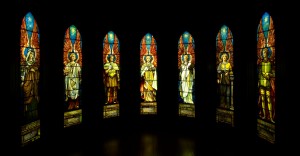 church history you can find a Laodicea. I believe it is a slander upon 21st century Christianity to say that we are living in the Laodicean age. There are some who are still living in Acts 19. I can take you to plenty of Laodicean churches, however, I can take you to some Philadelphia churches – they are all here today.

God is speaking to the Church. Remember the blessing is for all ages, wherever I find myself, the book speaks to us. His words are a sword and He comes and finds us where we are and He warns us the that outside influences have all been dealt with. But he says, ‘He that has ears to hear, let him hear.’ Jesus said ‘My sheep hear my voice’ only sheep in the Shepherd’s flock have spiritual ears to hear what the Spirit is saying.

The awesome warning to those churches was unless they repented He would remove the candlestick from its place. Our land is a garbage dump of buildings and on all the garbage cans it has got written the word ‘church’, but that does not mean to say that there is a church there. It may mean that once upon a time there were Christians inside. But the 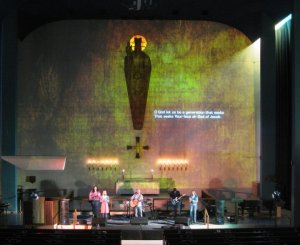 existence of a building does not mean Christians are still there. A church is constituted by a company of people who are vitally and mystically joined to Christ, and anything less than that is not a church.

This initial vision of Christ in the midst of the lamp stands is the only vision that makes the Christian cringe. All the other visions will cause you to dance for joy. But without this one being heeded, the others mean nothing. The beast is overcome, the world is already defeated, Satan is already bound, but so what…if the Church is not vitally linked to the ascended Lord…then their light will not shine anymore. ‘He who has ears to hear, let him hear’. Amen.

My wife Diana and I have been married since 1985 and have five wonderful children. I have been in ministry since 1980 and we currently reside in the Denver, CO area.
View all posts by Michael Welchert →
This entry was posted in Revelation and tagged buildings, christian, churches, persecution, presence, repent. Bookmark the permalink.
%d bloggers like this: