Posted on November 11, 2013 by Michael Welchert 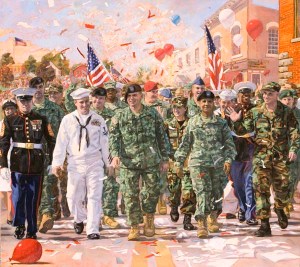 “Picture in your mind’s eye an image of a great warrior, a renowned champion, returning home from far-off lands. His fame has long preceded him, and now the reports of his feats are confirmed by the scars he bears, the remembrance of wounds more noble than any tokens of honor. With dignity he moves up the main causeway of the city, lined with the faces of his people, the very people for whom he has fought bravely, whose freedom he has secured. The warrior has returned after years on the field of battle, returning only when triumph was achieved and not a moment before. This is his homecoming, and it is as a conquering hero he returns, Before him, at the head of the street, stands the king, who is his father. The scene is both a homecoming and a coronation. For the father-king will now hand the kingdom over to his son.” –The Way of the Wild Heart

In my opinion, that is the best commentary of the opening verse and scene of the book of Revelation…

“The Revelation of Jesus Christ, which God gave Him“… Rev 1:1a

What did God give Jesus upon his return?  God the Father gave to his Son an unveiled, 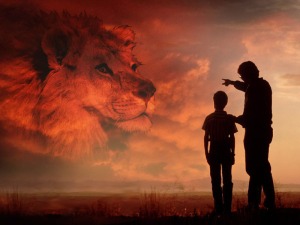 full disclosure, apocalyptic vision and catholic revelation of what his life, death, burial and resurrection accomplished.  He saw the “other side” of the Finished work.  Not the side where he was bleeding out, or the captivity scene from under the earth, or from the resurrected side of the garden or the seashore…the Other Side could only be shown after his ascension to the right hand.

The first person to see the revelation was the Son.  It is a homecoming of the greatest warrior-king who ever lived, fought, bleed and died on the field of battle.

The Revelation of Jesus is the encore of the Gospels…it reveals how the finished work of Christ through his life, death, resurrection and ascension is repeated in every sphere and sector of life throughout and across every era of time until eternity.

My wife Diana and I have been married since 1985 and have five wonderful children. I have been in ministry since 1980 and we currently reside in the Denver, CO area.
View all posts by Michael Welchert →
This entry was posted in Revelation and tagged ascension, battle, death, finished work, homecoming, king, resurrection, Revelation, warrior. Bookmark the permalink.
Loading Comments...