Posted on November 19, 2013 by Michael Welchert 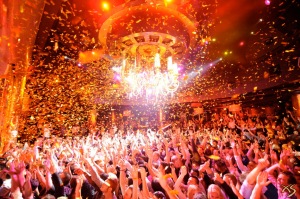 In my opinion it resembles a concert or a night club atmosphere. If we are always in the dark we lose the sense of the liturgical theatrics that we can have when it is more appropriate to be in the dark (Christmas Eve, Lent, Holy Week…) It use to be the Table was at the center of our assemblies, then the Pulpit and now the Band.

There are a few new church plants in town and they all do the same thing…spend hours setting up the stage for Sunday morning. We are a entertainment, recreational driven culture and people flock to it. I’m not saying God isn’t exciting, but do we still think that our “bounce house” Church on Sunday is God. Back in the 80’s we offered dramatic Christmas and Easter presentations to re-create the story and try to attract people. In the 90’s we used over the top lengthy praise and worship sets, in the first decade of the new

millennium we tried a dynamic multi-media showcase. Why did we do all of this? Because we were trying to present God without the presence of God. We were like the Russians trying to keep fresh color on the face of our dead leader, Lennon.

If you really want to try and keep up with the Jones’ (at least the Beatles were honest about their popularity contest with Jesus) then try and make your worship set and praise platform compete with Sir Paul McCartney at his halftime show at the 2002 Super Bowl. Here is what goes into the production behind a performance of this magnitude:

The crew had 6 minutes to roll everything onto the field and have it work 100%. They did it in four minutes and 53 seconds.  There were no ‘real’ rehearsals or run-through on the stadium football field (they rehearsed in a tent).  They began working on the production design in October 2004 (four months in advance).

I-MAG you saw came from 5 HD cameras supplied by Fox Sports.  The video content you saw was pre-determined and pre-programmed off-site. There was a team of 650 volunteers and assistants to stage the show, in addition to the professional crew and stagehands. The specially built on-field lighting towers could be raised to their 40 foot high positions in just 10 seconds.

Had Paul McCartney decided on a whim to just run down one of those four big ‘spokes’ shooting off the center performance platform where his piano was positioned, each of his steps would have cost about $30,000, destroying that dollar amount of LED panels.

Let’s stop trying to entertain the world with our “bounce house” presentation of God and let’s give the world want they really long for…the Presence of God…a light that needs no power source other than the love of God living in you, through you and as you.

My wife Diana and I have been married since 1985 and have five wonderful children. I have been in ministry since 1980 and we currently reside in the Denver, CO area.
View all posts by Michael Welchert →
This entry was posted in Sacred and tagged Beatles, dark, lights, Paul McCartney, praise, presence, world, Worship. Bookmark the permalink.
Loading Comments...