de Grot – The Cave of the Heart part 1

David is a national hero…he had a yellow ribbon tied around the tree at Jesse’s plantation as he went off to war against the Philistines and their giant, Goliath. He was given a victory parade upon his return and artists all over wrote and sang his song as a number one seller. Even the king of Gath asked: Did they not sing of him to one another in their dances, saying: ‘Saul has slain his thousands, and David his ten thousands’?”

David is a refugee in his own state, a fugitive in his own country. Wanted posters are up and APB’s are out. He runs for his life from the javelin throws of a madman, he lies to the high priest to eat the Bread of the Presence, he has no weapon so he retrieves Goliath’s sword then hides in Gath, the hometown of Goliath and immediately his cover is blown.

So he escapes to a cave…

So David left Gath and escaped to the cave of Adullam. Soon his brothers and all his other relatives joined him there.  Then others began coming—men who were in debt or in distress or who were just discontented—until David was the captain of about 400 men.  One day the prophet Gad told David, “Leave the stronghold and return to the land of Judah.  1 Samuel 22:1-2,5

Nobody plans on ending up in the cave, but sooner or later everybody logs sometime in the cave…the desert, the wilderness, dark night of the soul, the time of trial.

Q: What is your cave?

I know you might be thinking God is my refuge, fortress, an ever present help in the time of need, a sanctuary…but He only becomes that after you’ve logged some long hours in the hole.

At first de Grot is the place that you escape to, to hide-out in, it is a virtual reality…more virus and vice than virtue.  For David it was the place where he carried the heroism of his past, the hopes of his future and the heartache of his present.

• Where past failures visit us in the den of iniquity as long eerie shadows upon the walls.

• Where ghosts of what might have been haunt and taunt us of our grotesque inadequacies and limitations. 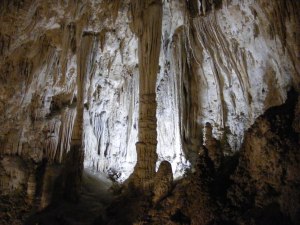 • Where the day dream of who we want to be…bold, courageous, outspoken, famous, loved, appreciated, beautiful, godly, generous, becomes a damp night mare of who we really are.

• Where unrestrained swells of emotions cry out from our soul onto the stage we call life, but where we aren’t seen or heard for what we want or need so we remain shrouded in silence and invisible.

1. Cave of anger, moods, temper mental, immaturity, gross selfishness, inappropriate cries for affection and attention, distorted and dysfunctional patterns to suck others into my madness.

2. Cave of lust, with multiple carved images on the wall of my mind and heart looking for solace, comfort, significance, value, love, where I sought to make myself feel better or feel better about myself.

3. Cave of entitlement, rage when I did get my own way, where I turned the hearth of our home into a cave that became a coffin of control and calculated coldness, if you didn’t cower to my callous demands.

4. Cave of self centered egotism, that prided myself on not being like everybody else, where I was better than that/them, where my pride was always proving to others that I had value, where I was unapproachable, had to be in charge, was aloof, unsociable, demanding of self and others, intolerable of mistakes, self-absorbed, aloof, unsociable.

The cave is un-nerving. It is a time of solitary where at first you see yourself as the king of the castle, but soon the wild creatures of fantasy, imagination, and lies that are lurking inside you come out to play in the shadows of your soul’s secrets.

One of the hardest things about the cave is that you begin to think that God has lost track of you. That you are forgotten and God doesn’t seem to care in the least that you are going though this pain and discouragement. But what you need to know is that God does some of his best work in the cave.

In the cave, God helps you begin coming out of denial and strips away your false-self. Here in the cave, at the bottom of life, you begin to sort out what really matters in life.

My wife Diana and I have been married since 1985 and have five wonderful children. I have been in ministry since 1980 and we currently reside in the Denver, CO area.
View all posts by Michael Welchert →
This entry was posted in Spiritual Formation and tagged anger, cave, darkness, David, denial, ego, fear, Heart, hideout, Pride, selfishness, tight spot. Bookmark the permalink.
%d bloggers like this: