The cave is a house of mirrors and each mirror gives an exaggerated effect. An area of our inner self that if dealt with honestly and not in denial we’ll be able to over time heal, grow and learn to transform the cave/stronghold.

The first step in healing or transformation is to break denial. Denial is only broken when people can be honest and the truth can be told about the hurting places and the places of loss in our life. When we get honest in the presence of other people (400), what happens is that we get energy out of that for something new – (a new stronghold…a place we’ll call Zion).

Broken people and people from outside the

margins is where interpretation needs to come from. We think that we are going to them to help them, but the thing that happens is that they teach us…they are so much closer to surrender and we still have so much stuff to let go of before we can get to that place of surrender where we can let go of everything.

Your cave is a foothold (don’t give the devil a foothold) or it can become by faith and obedience a Stronghold, a fortress, an ever present help in time of trouble.

The secret passage way through the cave is the key of David, a life of praise.  The psalms are staggering on their insistence of praise.

The reason for so much self-absorbed, self-centered living is because we have failed to make praise and worship the priority. Praise de-centralizies self and de-thrones the reigning empire of emotions & events. The exaggerated effect of praise is the difference between a cave of cripples and a cave of conquerors.

Praise doesn’t remove difficult people or destructive circumstances what it does is transfers the power/ownership to God. Allowing Him to remove the obstacles or provide the grace needed to endure or walk through them joyfully.  Praise is a garment to be worn. We are called to offer a sacrifice of praise. Praise magnifies God. Praise is the weapon that invokes God to fight for us.

Praise is faith in action. God inhabits the praises of his people so he becomes a cave dweller with us. Praise creates a palace, sanctuary, throne, and stronghold. It creates the illumination of two interconnecting spaces at once, so that the reality is: I will never leave you, I am with you always.

Jesus was born in a cave and buried in a cave.  He has 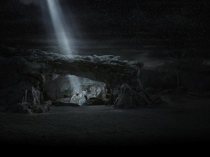 Cave dwellers become pilgrims on a journey…we are all looking for a way into and out of the cave, that is why we follow Jesus not only to Bethlehem, but to Christmas and not only to Jerusalem, but to Resurrection. 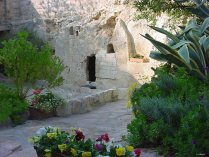 So praise not only brings him into your cave, but maybe it translates you into his manger and tomb. And when you are with him there you…all things are possible.

In 2 Samuel 5:7 David took the stronghold of Zion (that is, the City of David).  Zion is the place where praise meets grace.

The LORD is my rock and my fortress and my deliverer; My God, my strength, in whom I will trust; My shield and the horn of my salvation, my stronghold. Psalm 18:2

Zechariah 9:12 Return to the stronghold, You prisoners of hope. Even today I declare that I will restore double to you.

HALLELUJAH!  Go forth and raise some Hallel, YAH!

To express in an extreme degree or extravagant (spending much more than is necessary, exceeding the bounds of reason, going beyond what is justifiable…prodigal, lavish, wasteful). To boast or brag about God with loud shouting…to rave, hail, acclaim, to be filled with pride, jubilation or celebration.  Think of grown men celebrating in the end zone after a touchdown.

When you’re up against a struggle that shatters all your dreams, and your hope’s been cruelly crushed by Satan’s manifested scheme, and you feel the urge within you to submit to earthly fears, don’t let the faith your standing in seem to disappear. Praise the Lord! He can work through those who praise Him. Praise the Lord! For our God inhabits praise, for the chains that seem to bind you, serve only to remind you that they drop powerless behind you when you praise Him.

My wife Diana and I have been married since 1985 and have five wonderful children. I have been in ministry since 1980 and we currently reside in the Denver, CO area.
View all posts by Michael Welchert →
This entry was posted in Spiritual Formation and tagged cave consecration, denial, hallelujah, Healing, helpless, Hope, hopeless, incarnation, nativity, praise, resurrection, stronghold, Transformation. Bookmark the permalink.
%d bloggers like this: