Do What is Right!

Culture is the shared values we act out. – Rick Warren

He has shown you, O man, what is good; and what does the LORD require of you but to do justly, to love mercy, and to walk humbly with your God.

Do What is Right 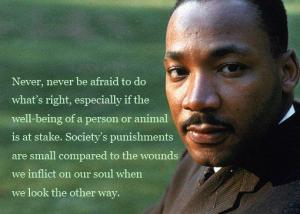 We Value the responsibility of conviction to do what is right toward others.

We transition today from Being to Doing. In life there is a progression from Be, Do, Have…having the good life is the result of being and doing…the right thing.

• Righteousness needs to be seen but it is not for being seen.
• God doesn’t need our good works, but our neighbor does. – Luther
• Charity begins at home and justice begins next door. -Charles Dickens
• Each time a man stands up for an ideal, or acts to improve the lot of others, or strikes out against injustice, he sends forth a tiny ripple of hope. – Robert F. Kennedy

What am I to do? I expect to pass through this world but once. Any good work, therefore, any kindness, or any service I can render to any soul let me do it now. Let me not neglect or defer it, for I shall not pass this way again. -An Old Quaker Saying

OF the world, when the accent is to be placed upon being IN the world. We act like we are scared of the world we live in and so we must separate from it/them. If you are really in the kingdom then you can afford being in the world without being troubled by it. If you are really anxious about that possibly then my recommendation is that you should have been held under the water a bit longer at your baptism.

Jesus lived among and calls us in John 17 to remain in the world as the incarnational presence of God among men.

What if…
• What if we stop segregating ourselves and share our common humanity?
• What if we become friends with sinners—because we can totally relate?
• What if we learn to share this good news in a way that’s not “us vs. them”?

The line separating good and evil passes, not through states, nor between classes, nor between political parties—but right through every human heart. – Aleksandr Solzhenitsyn

Paul said the Gospel came to you not simply with words, but also with power, with the Holy Spirit and with deep conviction. 1 Thessalonians.1: 5

Make a list of the needs you see that disturb you.  A great place to draw some ideas is from your local news.  It is a modern altar of intercession.

Here is a cry list of injustice concerning poverty and slavery.
Global Poverty
– 16% of the world lives on less than $1 per day.
– 80% of the world lives on less than $10 per day. USA=$100 /day
– 17,000 children die of hunger every day.
– The nations of the world spend $3 billion a day on defense. (56% US)
Modern Slavery
– There are an estimated 27 million slaves in the world today. That’s more slaves than were seized from Africa in four centuries of the trans-Atlantic slave trade.
– Human trafficking is the world’s 3rd largest criminal enterprise. (after drugs/weapons)
– 80% of human trafficking victims are female. (forced into sex trade)
– 50% of modern slaves are minors.
– In 1850 the cost of a slave in the United States was $40,000. (2010 dollars). The average cost of a modern slave is $90.

Now ask God to show you/us ways to exercise our faith and gifts to go about doing good and making a difference. You know how God anointed Jesus of Nazareth with the Holy Spirit and with power, who went about doing good and healing all who were oppressed by the devil, for God was with Him. Acts 10:38

Like Dr. Martin Luther King Jr. or Nelson Mandela who worked to rectify the social injustices of civil rights in their day. Let us look into the injustices of our day and go to work to bring about change.  Let your light so shine before men, that they may see your good works and glorify your Father in heaven. Matthew 5:16

Our mission is to participate in God’s mission to restore all creation to original goodness. Mission has its source in the nature and action of the Trinity…the Father sends Son, the Son sends Spirit, the Spirit sends the Church.

At Stone Table Church we go forth by expressing in everyday life God’s heart for transforming lives, renewing his church and engaging our culture.  We used the word “express” in our mission statement to call us to be moved…to take the action of love to the world all around us.  The phrase “in everyday life” is equally as important. We live our lives outside of the walls of the church and so as we go about living our everyday lives we want to be keenly aware that we are on a mission.  Our mission is not as obnoxious religious fanatics, but as authentic people whose imperfect life in Christ is being lived out in the routines and relationships of everyday life.

The question of the new millennium is, “Why do we have to choose between…Do we save them or do we serve them?”  These issues were directly addressed at the 2008 American Society for Church Growth conference, Balancing the Great Commission with Great Compassion.  Many younger evangelicals who are currently proponents of social justice are unaware that their predecessors’ quest for the social gospel ultimately led them to abandon the proclaimed gospel.

In response to Pastor Rick I wrote, They did change the world and that’s why so many of them grew so big. The local church was simply interested in having services at 9 & 11, but not about doing services. In fact, I am afraid that the resurgence of justice in the local church will only be a fad and will spread themselves to thin and burnout and run out of

money…money that previously built their shrines. Churches have for the past generation been very offended at the para-church because they were taking the tithe from the local church and actually getting things accomplished on the streets, in the prisons and around the world with it. Yes a few churches are getting it right, but let’s not put down our “little brother” Andrew because big brother Peter who has the keys finally remembered where he put them down before he fell asleep.

The Mission of God – by Christopher J.H. Wright
Where do we start? The language of the “priority of evangelism” implies that the only proper starting point must always be evangelistic proclamation. But the difficulty is that…
1. it is not always possible or desirable in the immediate situation, and
2. it does not even reflect the actual practice of Jesus.

Rather almost any starting point can be appropriate, depending possibly on what is the most pressing or obvious need. We can enter the circle of missional response at any point on the circle of human need.  But ultimately we must not rest content until we have included within our own missional response the wholeness of God’s missional response to the human predicament—the gospel.  That is why I speak of ultimacy rather than primacy. Mission may not always begin with evangelism. But mission that does not ultimately include declaring the Word and the name of Christ, the call to repentance, and faith and obedience has not completed its task. It is defective mission, not holistic mission.

John Stott on bringing a theology of love and vocation into the justice and gospel debate.
“The reason for our acceptance of social responsibility is not primarily in order to give the gospel either a visibility or a credibility it would otherwise lack, but rather simple, uncomplicated compassion. Love has no need to justify itself.”

A great example of what the Lord wants to continue to do in this hour is seen in the synergy of Billy Graham and Franklin Graham.  Between them we see the convergence of Samaritan’s Purse and the Evangelistic Association.

My wife Diana and I have been married since 1985 and have five wonderful children. I have been in ministry since 1980 and we currently reside in the Denver, CO area.
View all posts by Michael Welchert →
This entry was posted in Kingdom, Spiritual Formation and tagged conviction, doing, doing good, incarnation, mission, missional, para church, poverty, right, serve, slavery, social justice, world. Bookmark the permalink.
%d bloggers like this: