Posted on December 31, 2015 by Michael Welchert

We are not free at all until we are free from ourselves. It is that simple and that hard.

In a world where imperfection seems to be everywhere, the humble and honest have a huge head start in spiritual matters and can first and always find God in their simple lives. -Rohr

Don’t be fooled by the apparent innocence of the object you’ve chosen as an idol; what is the function of it? Most of our idols also have a perfectly legitimate place in our lives. That’s their cover, that’s how we get away with our infidelity.

God is “a circle whose center is everywhere and whose circumference is nowhere.”
-St. Bonaventure 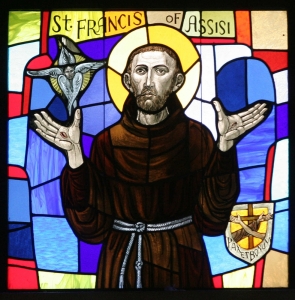 Thérèse once told her sister, Celine, who was upset with her own faults, “If you are willing to bear serenely the trial of being displeasing to yourself, then you will be a pleasant place of shelter for Jesus.”

If you observe yourself, you will see how hard it is to be “displeasing” to yourself, and that this is the initial emotional snag that sends you into terribly bad moods without even realizing the origins of these moods.

So to resolve this common problem, both Francis and Thérèse teach you to let go of the very need to “think well of yourself”.

Psychiatrist and writer Scott Peck, Thérèse’s quote was “sheer religious genius” because it made the usual posturing of religion well-nigh impossible. -Rohr

St. Francis left business as usual, and he began what he called an alternative life, which at that time was called “a life of penance” or abandoning the system. He decided to live a life focused on alleviating the needs and the suffering of others instead of a life of self-advancement.

from there we went out to serve the world. Most Christians got it backward by living in the so-called secular world and occasionally “going to church.” Franciscan spirituality is “a sidewalk spirituality” for the streets of the world and the paths of the forest. It is not primarily based in the monastery, in church buildings, or in any asceticism or celibacy. -Rohr

Francis himself spent most of his time on the road and in the woods, traveling between scores of towns. He also traveled with a couple of his followers to Syria, Egypt, and Spain. It does not seem he had much time for “community” as we now think of it. His life illustrated Jesus’ first and foundational definition of church: where “two or three gather in my name” (Matthew 18:20). Truthful encounter is always and already the mystery of “church.” -Rohr

Francis emphasized immediate experience and lifestyle: living in a different way. We were to live on the edge of the church in a very different lifestyle than simply running the church institution. -Rohr

The liturgy (worship) is the summit toward which the activity of the church is directed; at the same time it is a fount from which all the churches power flows. – Liturgical Constitution of Vatican II

Francis’ emphasis on action, practice, and lifestyle was foundational and revolutionary for its time and at the root of Franciscan alternative orthodoxy (“heterodoxy”).

You may be wondering, “How can Franciscanism be an alternative and still be called orthodox (right and true)?” Heterodoxy is precisely a third something in between orthodoxy and heresy! I sincerely think Francis found a Third Way, which is the creative and courageous role of a prophet and a mystic. He repeated the foundational message of all prophets: the message and the medium for the message have to be the same thing. -Rohr

My wife Diana and I have been married since 1985 and have five wonderful children. I have been in ministry since 1980 and we currently reside in the Denver, CO area.
View all posts by Michael Welchert →
This entry was posted in Moleskine and tagged adoption, Franciscans, idols, St Francis. Bookmark the permalink.
%d bloggers like this: